I know you’re going to be shocked to learn this, but there actually are DAW’s other than ProTools. You’re stunned, right? I just knew you would be. All kidding aside, I tend to do most of my work in ProTools. However, I do have occasion to mix in other DAW’s from time to time depending on the needs of clients. For instance, the other day I was mixing across town for a client and the session had been tracked in Logic. However, a separate session existed in ProTools in which some effects had already been edited.

So, what could I do to get everything working together in one session? Well, I had a few options…

Unfortunately, I didn’t have my iLok with me which contains my DigiTranslator license, so that scrapped any chance of using OMF. The Logic session contained several times more tracks than the ProTools session, so apparently I was going to export all my files individually from ProTools an reassemble them within Logic. However, they were already edited with fades applied and had been laid out properly within the timeline. How can you migrate all that data without losing something?

That’s right, the answer really is that simple! 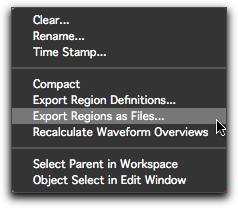 Who would have though it could be so easy to not purchase DigiTranslator? I kid, I kid… Of course, you do have to import your files into your other DAW of choice and drag them to Bar 1, but that’s fairly quick work. For those looking for a more streamlined alternative to the above described solution but still wishing to be thrifty, there’s also the very intriguing SSL Pro Convert. While I haven’t tried this offering from SSL, it certainly appears to be a cost effective alternative. Of course, the next time I forget my iLok, I’ll stick with the frugal choice; region consolidation.

Have an opinion on session interchange options? Please let me know in the comments!

thumbnail via Wikimedia Commons and EDL

Kyle P. Snyder is an audio and media engineer working on staff at the University of Michigan's Duderstadt Center (opinions are their own). They write about audio, technology, education, and other miscellany.