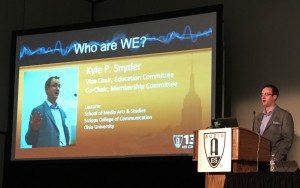 Also at the 139th Convention, on of Snyder’s students, Michael France, was elected as the new Audio Engineering Society Student Delegate Assembly Vice Chair for North & Latin America. France was elected to succeed Steven Van Dyne, a recent School of Media Art’s & Studies alumnus who was elected at the 135th AES Convention in 2013 and retired at the 2015 Convention.

Kyle P. Snyder is an engineer, educator, and consultant skilled in audio recording and mixing, sound design for film and video, facility design and integration, and live event production. Snyder works remotely on projects of all sizes from his Ohio-based studio, White Coat Audio, LLC. He is also a faculty member within Ohio University’s School of Media Arts & Studies dedicated to the advancement of audio education for engineers at every stage of development where he routinely teaches courses in music production, critical listening, and sound design for film and video.