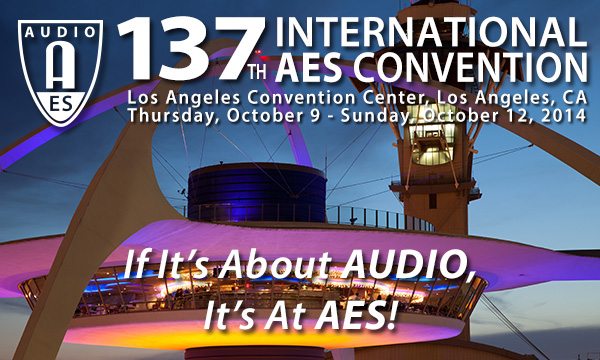 The panel will feature the likes of Mike Senior (Mixing Secrets & Recording Secrets for the Small Studio), Alex Case (Mix Smart & SoundFX), Jason Corey (Audio Production & Critical Listening), and David Miles Huber (Modern Recording Techniques, 7e). I’m particularly pleased to announce that Focal Press has once again asked me to moderate this panel of great authors, which I think will be a great session for all in attendance. I’ve worked with Focal Press for some time now and have always been impressed with the immensely high level of technical expertise that their authors bring to the table, and this panel is sure to further that reputation. It’s worth noting that the 137th AES Convention will bring other non-panel related Focal press from me as well, so stay tuned for that as well!

If you have questions for these authors, either for someone specific or in general on the topic of the author’s panel, I’d invite you to leave your question in the comments below (or via twitter directed to @KylePSnyder) as I absolutely welcome suggestions from our audience.

I hope to see you at the AES Convention, and I’d invite you to join us on Sunday, October 13th at 11am. For more details, be certain to consult your AES program. 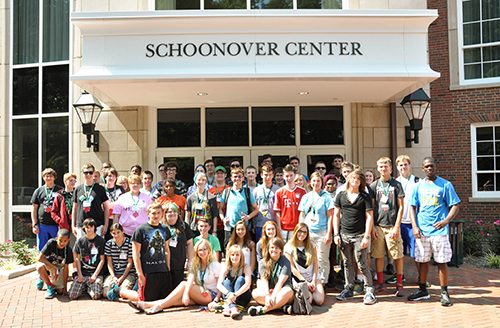 More than 50 students converged upon Athens in July week for the Media High School Summer Workshop at Ohio University. The Scripps College of Communication School of Media Arts and Studies sponsored the event, and most sessions took place in the new Schoonover Center.

Participants came from seven states, including California, Alabama and New Jersey.  “We expected campers to come only from Ohio, but word spread and we were delighted to attract students from across the country,” said workshop Director Karen Riggs, a professor in the School of Media Arts and Studies.

“The depth of enthusiasm that these young media makers demonstrated was inspiring,” she added. “Most students are incoming seniors, and we cannot wait to see many of them on the Athens campus next year.”

Riggs said demand surpassed facility accommodations. “As Schoonover Center construction advances, we hope to be able to add space for more students next year,” she said. “It was hard to turn applicants away but a pleasant surprise that so many people wanted to be part of things.”

Kyle P. Snyder, also an instructor in the school, served as associate director of the camp.  “Each participant brought a unique and creative spirit, which made for a collaborative and powerful educational experience,” he said. “Seeing what these students created after just meeting and spending mere hours together is a testament to our fantastic instructors and to the talent of these future media creators.”

“I’ve been planning on going into audio production and recording at OU for a while, but I’ve never known how to get started,” said workshop participant Alana Baldwin, who will be an Athens High School junior this Fall. “The camp gave me the knowledge and experience to really get going on my career.”

Campers also participated in social events, including a walking tour of the Ridges and a mixer with campers from the School of Journalism workshop. They roomed in a dorm on East Green and dined at Nelson Commons, feeling the ambience of the Athens campus.

On the final day of camp, students gathered in the Scripps Auditorium to view and listen to their individual and group projects. Each of the four groups created an animation from their individual drawings, recorded an original song written by a student in the group, and produced a television segment that helped create an entire narrative episode during the workshop.

As they departed, many noted that they had made social media connections with new friends, whom they hoped to meet again as OU students.

Olivia Powers, coordinator among the four MDIA student ambassadors, praised the campers for their work ethic. “They were  engaged, enthusiastic and curious about the various fields of media,” she said. “The students consistently impressed all the ambassadors.” Her fellow ambassadors were Tyler Blust, Hanna Cimperman and Brett Maszczak.

Drew McDaniel, director of the School of Media Arts and Studies, said camps like this one make an impact on media programs.

“The School of Media Arts & Studies profits by exposing interested high school students to the professional and academic possibilities of work in media,” said McDaniel. “It allows us to identify and possibly recruit to study in our school some of the best and most media savvy high school students across the US. Students gain by developing ideas about career possibilities in their field of interest while having a fun time exploring life on a college campus.” 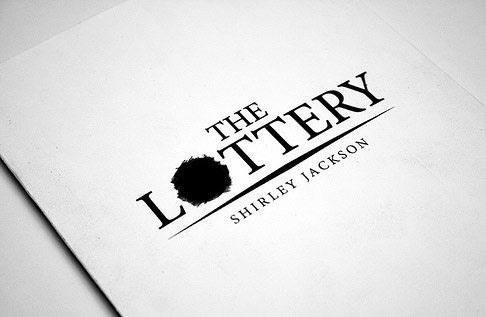 Over the past several years I’ve posted frequently about an exciting partnership between Ohio University Media Arts & Studies students which again continued into the Spring Semester of 2013-2014 and provided an internship / independent study opportunity to complete an exciting audiobook / radio dramas, an ongoing content initiative of the WOUB Public Media.

I’m pleased to report that our amazing team of students have completed production on The Lottery by Shirley Jackson and production is underway on Arch Oboler’s Bathysphere. Once again the results are amazing and we once pleased to announce that once again the project (now known as Ecoustic Alchemy) won a prestigious First Place award within the Media Arts & Studies Category at the Ohio University Student Expo 2014. 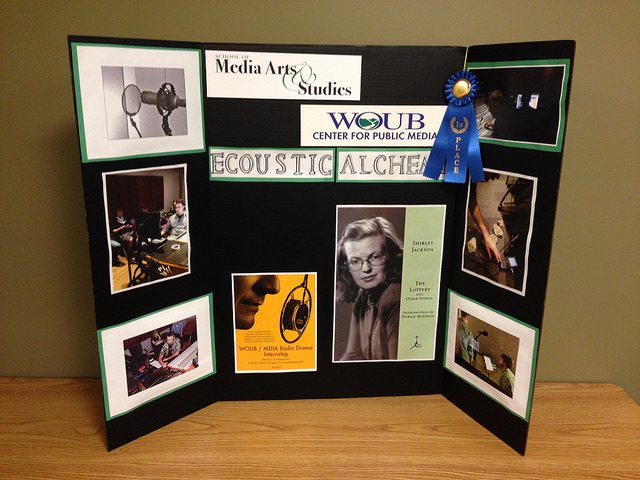 Above: The prize-winning expo display.

Whether you’re just beginning a career in recording or you’re at the top of your game, documentation is key. Imagine you’ve just finished a killer tracking session, one you may want the ability to recreate someday (hint: that’s potentially every session), so now what? I’m generally confident in my memory for microphone placements and studio setup for a few months, however plans change over time, and what may have been easy to remember tomorrow suddenly needs to be compartmentalized until everyone is available again next month. Plus, there’s no remembering compressor or EQ settings, let alone values for gear that has less than descriptive faceplates.

So, what’s an engineer to do? Well, the obvious answer is documentation of some form. If you’re serious about this business, you’ll be documenting your session. After all, you never know what may become of that last-minute project you did last week, and it’s always valuable to be able to look back. All this having been said, what form of documentation you use depends completely on your work-flow and needs. There are many important items which should be included in your documentation, as discussed by David Miles Huber in his newest version of Modern Recording Techniques, 8th Ed.

For David’s thoughts on documentation as well as sage advice from Kyle on the various forms that production documentation can take, be certain to click through to AudioUndone.com for my complete article.

Session Documentation: Plan Wisely & Arm
Yourself With Data! on AudioUndone.com 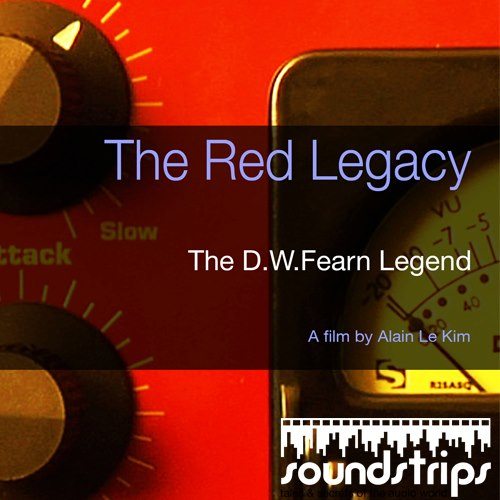 I always love to check out new documentaries, so I was especially pleased when Matt McGlynn of RecordingHacks asked if I’d like to take a peek at The Red Legacy – A Documentary on DW Fearn by Soundstrips’ Alain le Kim.

I don’t want to spoil all the details here, though it’s safe to say the documentary has earned a spot in my ever-growing list of classroom resources. For all the details including full text and a video teaser, be sure to click through to the review.

The Red Legacy Review on
RecordingHacks.com

Whether you’re just starting out with audio or an experienced practitioner, some principles are absolute. We may bicker over best practices for microphone placement or the nuances of tube vs. solid state. However, as with everything audio, it’s the fundamentals that are most important. As an educator, I find that one of the most critically important concepts to grasp is that of the signal chain.

As we know, our consoles large and small can readily be dissected into parts of various sizes which makes the physical realm very easy to grasp for most individuals. However, signal flow comes in may shapes an sizes! After all, most students arrive at college today having experienced at least some DAW, meaning they have experimented with signal flow without being introduced to the theory. So, let’s take a really brief look at analog console signal flow and how it relates to the DAWs we use. You may be surprised how much more sense your software makes once you understand its analog brethren.

This is sage advice, so be certain to click through to AudioUndone.com for my complete article and several great tips laid out by David Miles Huber in his newest version of Modern Recording Techniques, 8th Ed.

Understanding The Basics of Analog Signal Flow & How
They Relate to DAW Usage on AudioUndone.com

For MDIA students working in the Pro Tools Mac labs and vocal booths, it can occasionally be tricky to ensure that your system is properly configured. Thankfully, with the release of Pro Tools 11 we can all expect much smoother sailing in the coming year. Yes, we’re just as excited as you are! However, the labs will be running both Pro Tools 10 and 11 for some time now and we know that the constant flow of students in and out of the Mac labs can make consistent configurations tricky. So, your audio professors are here to help!

Please be sure to consult the guides above and ask your peers for help before sending your professors an email for help. Of course, if you’re stuck we’re always available as a resource. 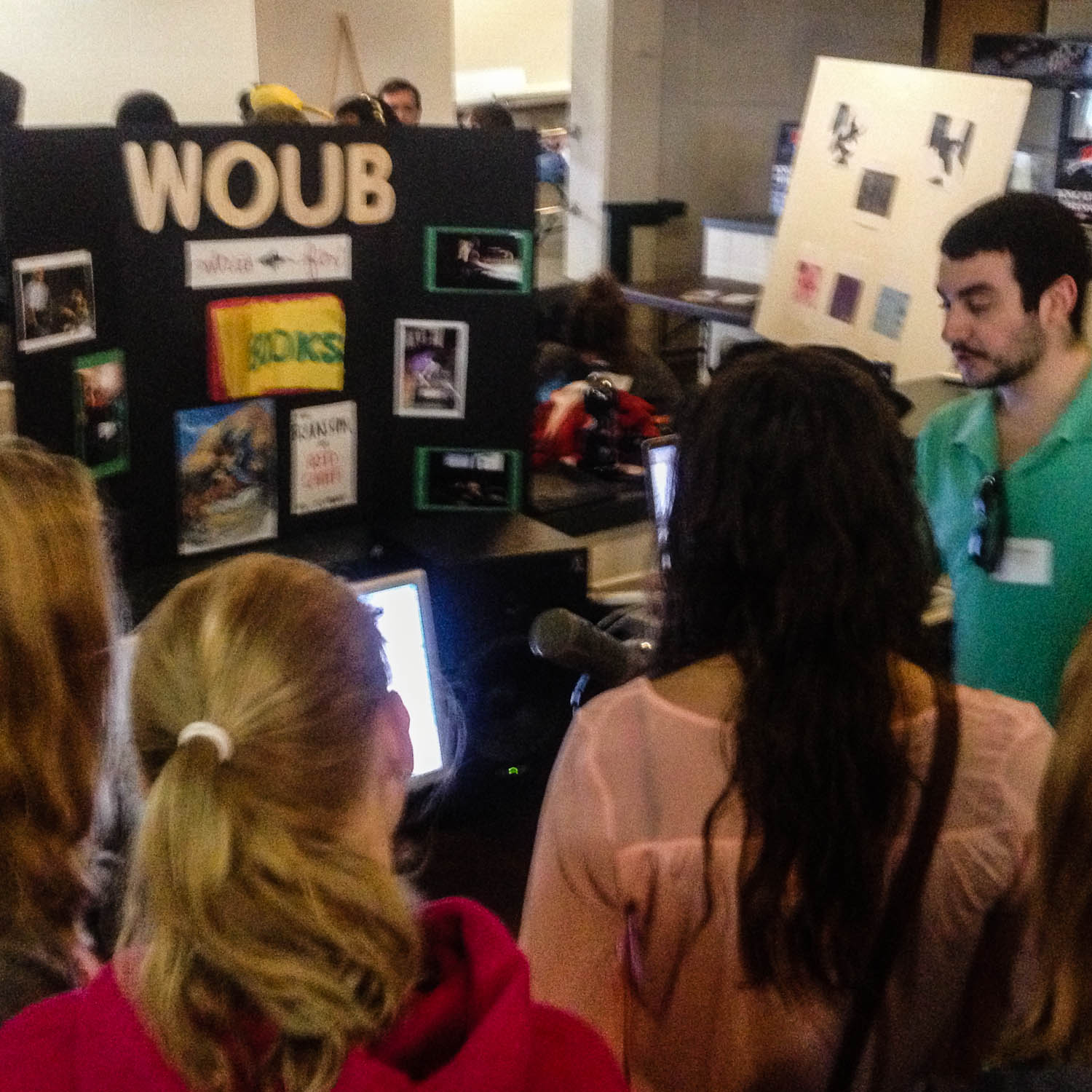 Over the past year I’ve been fortunate to lead two wonderful teams of students in internships between Ohio University’s Media Arts & Studies WOUB Public Media, and I’m pleased to announce that after an award-winning spring semester we will be continuing this.

Needless to say, if you are a Junior or Senior interested in broadcast audio or sound design, are a self-starter, and have previous studio or sound design experience then we want you to join our mini production company to create an all new radio drama (more info).

Curious what’s been created by past production teams? In Spring 2013 our amazing team of students produced The Ransom of Red Chief by O Henry and the results are amazing! We’re particularly pleased as this project won a prestigious First Place award within the Media Arts & Studies Category at the Ohio University Student Expo 2013!

Interested students will work independently and alongside WOUB mentors to recording vocal actors, design and record sound effects, and much more.

For Fall 2013, we’re planning on recording another one of the great works by Beatrix Potter, though pre-production is currently in early stages. Completed radio dramas will be aired not only on WOUB-AM but also published on WOUB.org, providing valuable production credits with a widely respected media outlet.

If you are interested in this unique opportunity, please contact Kyle P. Snyder, Visiting Assistant Professor of Media Arts & Studies, by Wednesday, September 4th at snyderk@ohio.edu. Several positions are currently available including Student Project Manager, all which will be filled on a first come, first served basis so act fast! 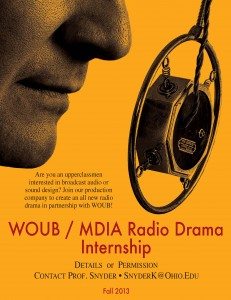 For all our fans out there, we hope to be sharing some of progress on in late September. In the meantime, check out The Ransom of Red Chief from Spring 2013 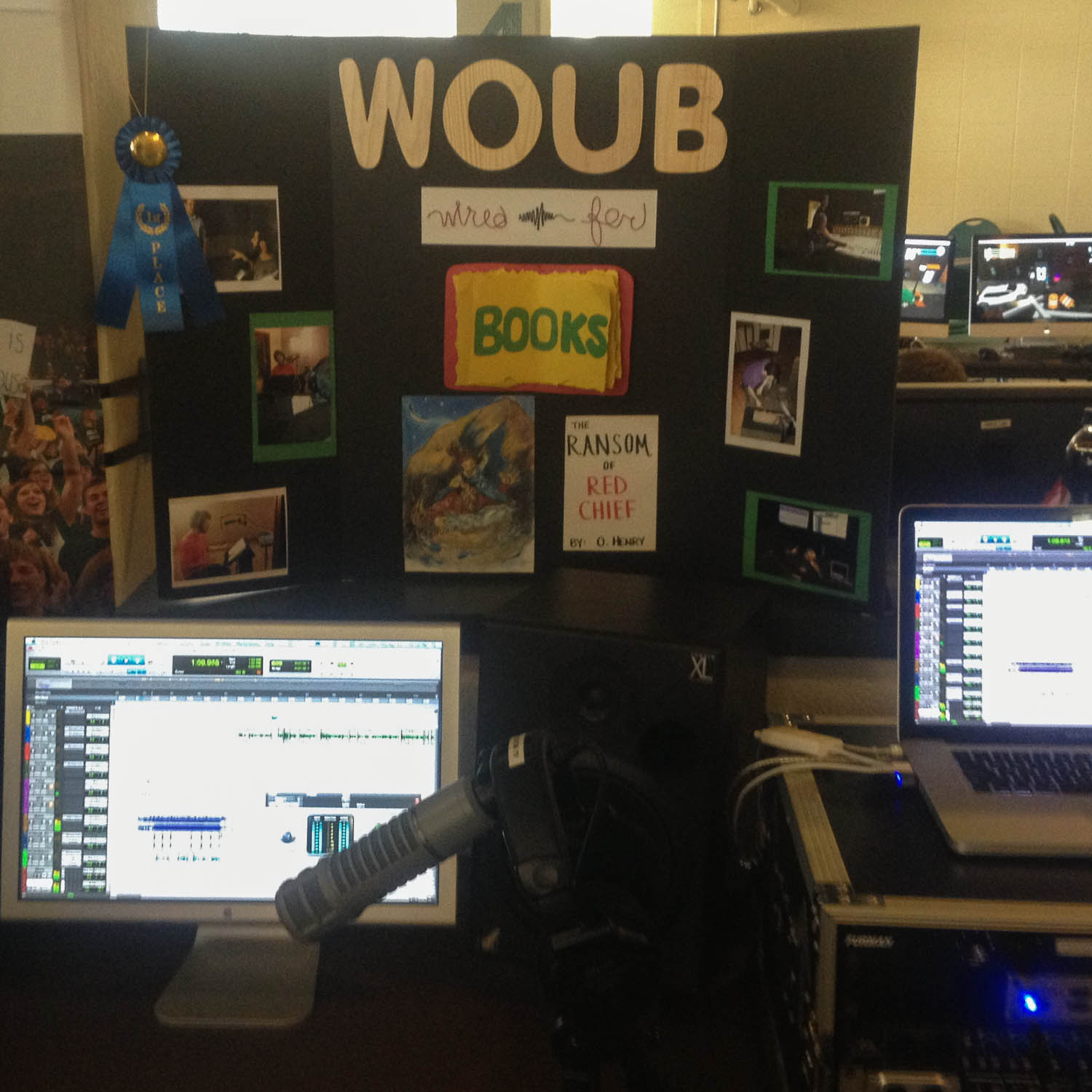 Over the past year I’ve posted frequently about an exciting partnership between Ohio University Media Arts & Studies students which has continued this Spring Semester of 2012 – 2013 and provided an internship / independent study opportunity to complete an exciting audiobook / radio dramas, an ongoing content initiative of the WOUB Public Media.

I’m pleased to report that our amazing team of students have completed production on The Ransom of Red Chief by O Henry and the results are amazing (yes, we have audio)! We’re particularly pleased as this project won a prestigious First Place award within the Media Arts & Studies Category at the Ohio University Student Expo 2013. 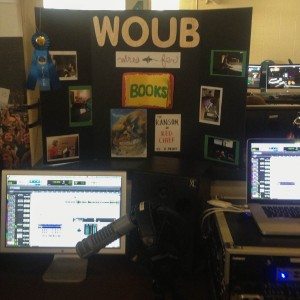